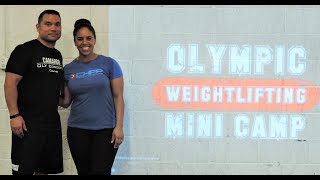 CHFP is excited to announce that Senior International Coach Daniel Camargo will return as our Elite Guest Coach for this year's Olympic Weightlifting Mini Camp which will be held on August 17-18. One the most well-known and sought-after weightlifting coaches in the US, Coach Camargo is a 27- year veteran of Olympic Weightlifting who has represented the United States in international competition as an athlete and coach before establishing in own Weightlifting Club in 1999. In

CHFP Weightlifting sent a small squad of five elite athletes to compete at U25 Nationals and the Las Vegas International Open held in advance of teammate Avery Owens competing at the IWF Youth World Championships also to be held at the Westgate Las Vegas Resort and Casino. First up at the U25 Nationals was Youth athlete Morgan Bramble who returned to weightlifting competition in spectacular fashion. Competing in the 55 kg class, Morgan combined a PR snatch at 67 kg with a 83

Strong Start to Competition Season at NAO Series I

CHFP Closed Temporarily Due to Coronavirus

Strong Start to Competition Season at NAO Series I